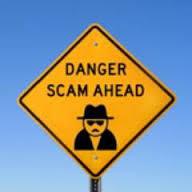 I think we all know what it means to be scammed.  The emotional impact of being on the receiving end of a romance con is often hard to describe, however, it is never difficult to feel once you have gone through it.  You are not alone!

Sharing your thoughts with others who have been affected by the same emotional and/or financial turmoil shows we have a lot of compassion.

Signs of a scammer:

*  They are wearing a wedding ring in the photo yet they claim to be single.

*  They claim to be some other ethnicity when the photo is of a Caucasian.

*  They claim to be older/younger than the photo looks.

*  Their first name is also odd, like Martins, Williams, Kevins, Waynes.  (Plural with an "s" at

*  They claim to be from Keller, VA.  Why?  Because it has the same zip code as Nigeria,

*  They immediately want to get you off the website and onto Yahoo IM.

*  They are not usually around during the weekends to IM.

*  They IM at unusual hours for your time zone.

*  Their spelling is awful!

*  They appear to be uneducated in regard to their speaking/writing skills.

* They like to send you poems or love letters, most of which can be traced back to the

*  They claim to love you either immediately or within 24-48 hours.

*  Most of them claim to have lost their wife/husband.

*  Claim they are in the hospital and the doctor will not release them until you send money.

*  They claim to have been mugged, have no money and are being held hostage.

*  If you question them or deny them about sending money, they become verbally abusive.

*  If you call them a scammer, they get highly offended.

*  They claim it was destiny or fate that brought the two of you together.

*  They claim God brought you to him/her.

*  They immediately want your address to send flowers, candy or teddy bears, often

purchased with a stolen credit card.

When you find out you are dealing with a scammer and have become emotionally invested; no doubt, you wonder "what happened"?  Does it make your heart hurt any less to know or understand what has been done to you?  Unfortunately; no, not really.  You became emotionally invested and aside from the loss of money, this is the hardest thing to deal with. We are in love with these people (or who we've been led to believe they are), and to go from believing we have found someone to build a life a life with, to learning that it was all a charade built on the pretense of robbing us blind.  Who does something like this to people? Who does this kind of thing in the name of love?  Just the idea that you have to try and get your head around that concept is enough to drive you insane, let alone tell your heart that it has to accept this as well!  It not only feels impossible; however, at times, it actually is until we can find a way to let go of the emotional pain.

There are countless others who were told the same lies, believed in a love that did not exist and cared enough to send money to someone we loved and cared for to help them.  You have done nothing wrong and nothing you should blame yourself for.  You went in search of someone, like yourself, to share your life with.  No doubt, you are an honest, good and loving person who believe that other people are the same, and in many cases, they are.  The only thing that makes your story unlike all those successful dating site stories is that a criminal got in front of the person you were meant to be with and stole your time, your money and your heart.  You were a victim and he is a criminal!

The best thing to do is to block him from communicating with you.  Try to get some rest to give yourself a much needed break from all the emotional stress.  You will need time to get back in touch with yourself and regain your emotional strength!

Please don't be hard on yourself!  Scammers are very skilled at what they do.  We are naturally, caring-loving people and scammers bring out this need to help someone else in need especially if a tragedy happens to them and they play this to their advantage.

Even after you find out the person you have fallen for is a scammer, it is very difficult not to pick up the phone and call him.  Deep down inside, you perhaps are holding on to a little drop of hope that he s real, however, you know he isn't.  For some reason it still feels good when he calls, especially when he knows that you are not going to send him anymore money.

Letting go is never easy!  Until you can pull back the layers and get to the reason why you feel the need to talk to him, you will keep going back to it.  You already know that you don't need to talk to him because it causes you pain.  What if you stop calling him?  Most likely, he will call you another 4 or 5 times; however he will stop because he has done all he can to turn you back into a profitable victim and has been unsuccessful.  He will move on to another and spend him time lying to them.

The 5-steps of the healing process are:

Denial.  "I feel fine, this cant be happening to me"!

Rationalizing.  "Maybe if he only loves me".  I am sure he did this because of financial hardship,

Depression.  "I'm so sad, why bother with anything"?

Acceptance.  "It is going to be OK".  "I'm not going to let this happen to anyone else".

Treat being scammed like a death or divorce.   Go a little nutty for a while, then come back stronger and wiser!